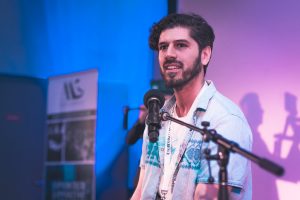 / IS:
Yusuf Yoshi Misdaq is a novelist, poet, musician & multimedia artist. He is Afghan (born & raised in Brighton, UK, and presently living and working in the USA). Through an experimental, abstract style, Misdaq’s work across genres harmoniously blends psychological / spiritual self-examination, a regeneration of world traditions, and keen observations of contemporary society. His furious output, energy & productivity are sparked by passionate love for each of his respective art-forms & dedicated, organized practice.

/ HAS BEEN:
Since 2004, Yusuf Misdaq has released 3 novels, 7 books of poetry, 5 LP’s of music, as well as 2 documentary films. In 2005, he graduated with a BA in Media (University of Sussex) & in 2007, graduated again with an MA in Documentary Filmmaking by Practice (Royal Holloway, University of London). In 2011, he was offered a place on the Creative Writing MFA program (American University, Washington DC) & then in 2014, was accepted to begin his PhD in Comparative Literature (SOAS, University of London) both of which he was unable to accept. He has travelled for his art extensively & has called home cities like London, Lilongwe, Washington DC, Santa Rosa de Copan, Flint, Baltimore, New York City; he has most recently been living in Honolulu, Hawai’i.

/ WAS SEEN:
Some years ago, NPR, the BBC (TV & Radio), Wire magazine, Stylus & many others featured the work of Yusuf “Yoshi” Misdaq. Despite this early media attention, the evolving nature of his work, voice & mission (by design, a highly intimate one) has meant his approach to seeking publicity has also changed. Yusuf seeks to create an increasingly primal & direct connection with his audience, not just through his actual work (which is, itself, primal & direct) but also in the way that work is presented to (& discovered by) people. Marked by a spirit of humility & unusual sincerity which does not always easily lend itself to social / news media, his end goal is to leave an indelible, lasting seed-stamp of inspiration upon the present human heart, often going one person at a time.

A more natural way of discovering art can create more space for the discoverer to trace their own origin story around that discovery; thus that discovered artwork may help a person create more holistic, meaningful connections going forward. The net result of this is inevitably a decreasing spotlight on the artist, and more empowerment for those people the artist is working for. Yusuf’s belief in service, hard work (integrity), as well as his enjoyment at creating interesting experiences all culminate to make his way; perhaps one/some of these ways have brought you to this website.

/ QUOTEIN:
Yusuf “Yoshi” Misdaq has described his art & mission as, “a vast star-charting documentation / exploration of the infinite depths of Truth and Love.” He has also called his work, “Quotidian pills of philosophical rose-water, mixed with ground seeds of unification, spiced by observation, psychology and spirituality.”

Yusuf Misdaq’s 3 novels to date (Pieces of a paki; Narayan; The Steep Ascent) are notable for their direct narrative style, keen sensitivity to (and illustration of) the intentions / inner dialogues of his protagonists, as well as his own unique ‘realism=magical’ element. At the same time, the genres of his books have varied from one to the other (coming of age, urban contemporary, fantasy/satire). Another recurring theme in much of his writing and poetry is that of the everyday Westerner’s encounter with concepts of instinct, creativity, belief, spirituality & -sometimes more specifically- Islam / Muslims. His writing has been praised by best-selling novelist Khaled Hosseini (The Kite Runner) & featured on NPR, BBC TV & Radio. Yusuf has read his poetry at the Gielgud Theatre at RADA in London, as well as at the Howl! Poetry Festival in New York City.

Yoshi has written, produced, performed & released 5 solo albums + numerous other collaborative albums & projects. His work began as an echo of mid-late 90’s Hip-Hop and Electronica music & has since expanded into dub, folk music & much spoken-word improvisation. Yoshi plays the guitar, the harmonium & the piano, although his first and most abiding instrument was/is the sample; his recent albums also feature his playing of numerous world-folk instruments such as the guimbri, djembe, rubab, shamisen etc. Yusuf was the first to be an established MC/Producer + Singer/Songwriter at the same time. His music has been featured and critically acclaimed in magazines like WIRE, Hip-Hop Connection and Stylus (bought by Pitchfork in 2007). Described as “a spectral presence in music” whose works, “embody sincerity,” and are “imaginative and exploratory in nature [1]“. His most recent album is 2017’s ‘Misted Almond Legacy‘.

Since graduating from Royal Holloway, University of London with an MA in Filmmaking (Documentary Filmmaking by Practice) – Yusuf has chosen a more experimental path for much of his film-based artwork & documentary projects. While working professionally as a producer, video editor & occasional cameraman for various media organizations, & continuing to create observational documentaries, Yusuf’s most potent, innovative & innate style is one that veers back towards his initial point of origin in film: the home video. His numerous music videos have all experimented with home cameras, mobile-phone cameras and hand-held video devices, which alongside his unique approach to (and populist philosophy of) Video Editing, contribute to a very particular aesthetic. The 12-year-old Yusuf who directed feature-length films on his fathers Video 8 has changed very little in terms of this independent, DIY, imagination-based sensibility. Consistent with his claim that all people are (and must be) creative, Yusuf has described the aim of his unique, natural style as, “empowering the everyday audience who watch those videos, providing a solid-base for artistic license and experimentalism within the realm of the everyday world, for everyday people to get in on.“

Misdaq's work frames post-conceptual, pre-modern, past-future permutations and channels them into meta-narratives located around the dadaist neo-colonial ideal, seeking to deconstruct the sex/power paradigm and reformulate it with realpolitik representations of didactic faux-global transcendentalism.

Leave a Reply to Aneela Bux