← Libyan Uprising
If You Ask Me, Yes → 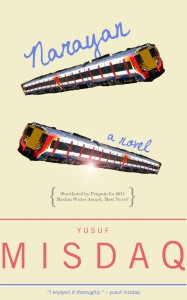 Narayan, a novel by Yusuf Misdaq (available for Kindle)
From Amazon.com:

“A blurb-resistant invitation into the diffuse, muted glory of the everyday… A brave story of subtle survival in a place so utterly (yet not entirely) disconnected as London.” – Dr. James Caron, SOAS, University of London

“He walks the High Street, shares a table at Starbucks, stands behind us at the deli or supermarket. It matters little what he, or she, does in life: a doctor, banker, the lady who takes-in the dry cleaning, Narayan is one of us, our reflection, plodding along, subdued, comfortably numb… Under all the accumulated drab of meaningless days, he has nurtured a gem: his humanity is intact, and when he awakes, when the mist lifts, he will repaint the world in pinks and reds.” – Francesco Cincotta, Artist & Writer

Finished in 2008, and nominated by Penguin UK for a ‘Best Novel’ MWA award in 2011, ‘Narayan’ is Yusuf Misdaq’s second novel; a powerful portrait of London commuter life, filled with the lyricism and humanity that are characteristic of this author / musician’s rapidly increasingly body of work.

The story of Narayan, a humble, unassuming Sikh man working in a train station ticket office, is one of urban realism, and at the same time, an exploration of man’s inner-world, taking on the mundane and the profound in one brave, poetic sweep. Set against a dreary Hounslow Winter, Yusuf Misdaq has crafted, out of almost nothing, a searing portrait of existential hardship and hope.

Combining the whimsical and dynamic narrative-style of Kurt Vonnegut with the understated, philosophical frankness of W. Somerset Maugham, here is a powerful and heartfelt tale of today’s England, told by one of its boldest new voices.

Narayan, a novel by Yusuf Misdaq