From Director Yusuf Misdaq comes a film to warm your heart.

Available to view by invitation only.
All inquiries, use the contact form on Inroad Circles page.

‘Ocean of Safety’ is an experimental art-film by British/Afghan multimedia artist Yusuf ‘Yoshi’ Misdaq.  Splicing & re-mixing over 200 classic films & TV shows from England & America, the film is a philosophical, humorous & offbeat mosaic; a tapestry on the meaning of existence. It stars Michael Douglas as Humanity.

‘Ocean of Safety’ visits & explores traditional approaches to living & dying (focusing largely on classical Central-Asian & Far-Eastern philosophies, notably Sufism). Then, through the lenses of Michael Douglas & Western mainstream culture in general, it spotlights intersecting points of unity between the two. These are the tracks of harmony where both ancient, modern, East, West, secular, spiritual, man, woman & child all meet, converge… Warmly embrace.

Featuring the music of Prince, Michael Jackson, Queen & Shabazz Palaces, ‘Ocean of Safety’ is also a technical masterclass in the fine art of video editing & subtle sound design. The film took 4 years to complete, beginning as a PhD thesis proposal before evolving organically over time into its present form. Film production began in earnest in 2010 & was wrapped in late 2014. 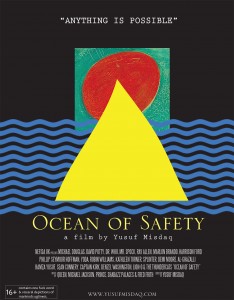 Yusuf Misdaq received an MA in Documentary Filmmaking by Practice, from Royal Holloway, University of London in 2007. During production of the ‘Ocean of Safety,’ Yusuf also worked as lead video editor for news organizations such as Democracy Now! in New York City & The Real News in Baltimore [See Bio for more info.] ‘Ocean of Safety’ is Misdaq’s second feature-length film.

MORE ABOUT HOW IT’S SCREENED:

It is being screened by invitation only in an exclusively offline, community-oriented, money-free approach that combines Yusuf’s backgrounds in performance, design, video/installation art & documentary film. A warm space, preferably apartment or home, is created and curated to facilitate and support the themes of the film. Strangers come together, sweets & tea are served, good manners abound. There are no copyright infringement issues surrounding this film, no money is made from it & its primary purpose is to build (& bond) disparate communities. You may expect candles, tea, intimacy, communal vibrations & a tone of general inspiration.